On April 22nd, the first in a series of three ACCT Let’s talk… webinars took place with the purpose of Advancing Continence Care Together from a holistic perspective. 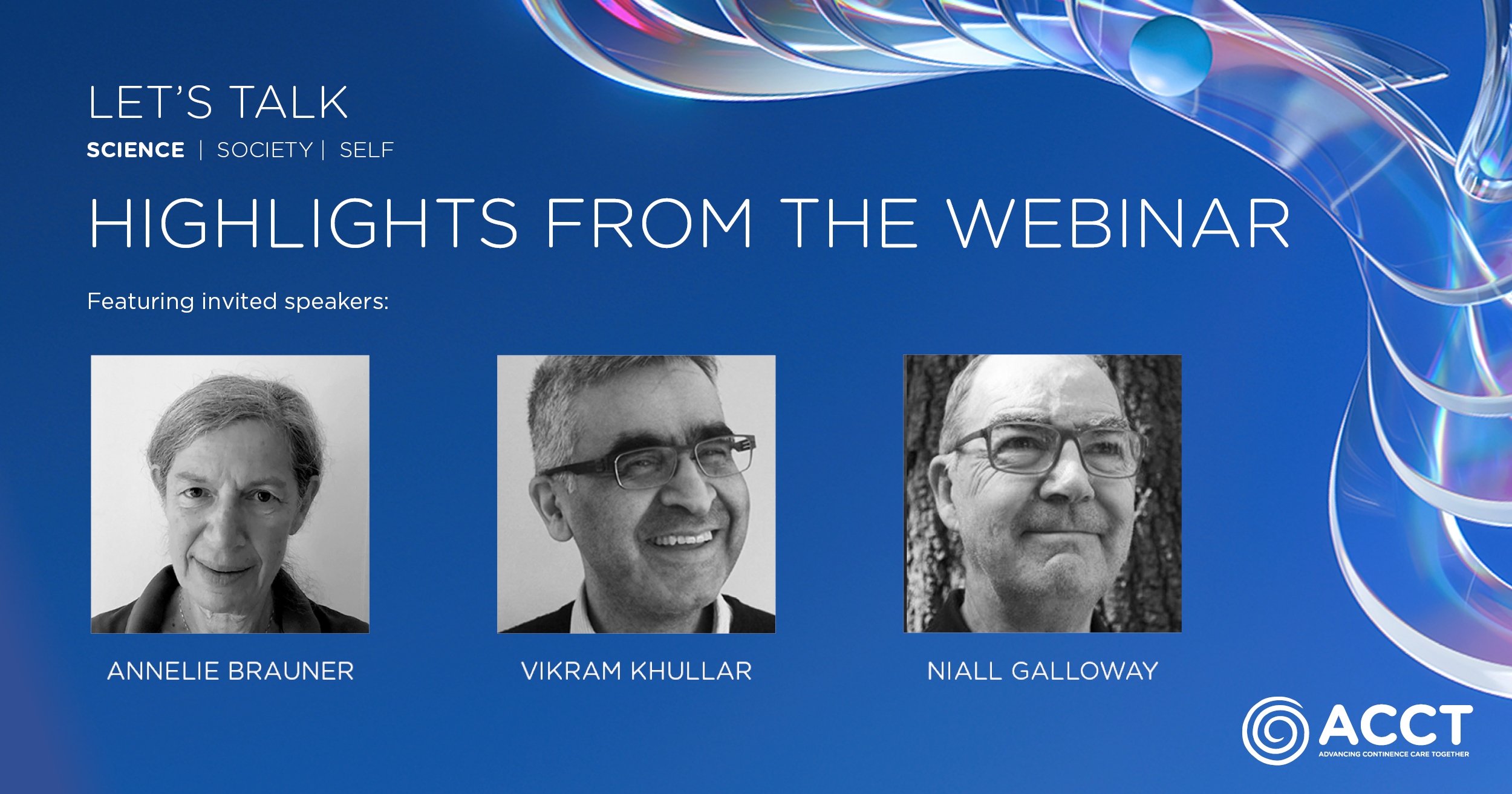 With the contribution of Professors Annelie Brauner, Vikram Khullar and Niall Galloway, renown lecturers and specialists, this first webinar looked at bladder and bowel management with a scientific focus. Here we share some highlights from the webinar, which you can also watch on-demand, using the link below. If you enjoyed Let’s Talk Science, make sure you don’t miss the next webinars Let’s Talk Society on May 20th and Let’s Talk Self on June 17th!

ESBL stands for Extended Spectrum Beta-Lactamase, an enzyme found in some strains of bacteria. ESBL-producing bacteria cannot be killed by many of the antibiotics that are commonly used to treat infections. We often find them in the urine where they cause urinary tract infection (UTI). In more than 40 % of patients being infected with ESBL, it takes more than a year to get rid of the infection. Often these patients get the wrong antibiotics and as a result, need to stay longer in hospital. It’s safe to say that there is a significant clinical and economic burden associated with ESBL bacteria.

The question whether there are prophylactic methods to prevent UTIs have focused a lot on cranberries. In a study using 12 months prophylaxis of either cranberry or antibiotics, it was shown that the recurrence of UTI occurred earlier in the cranberry treated patients and they also received more UTIs. So, according to Annelie this is not a satisfactory way to prevent recurrent UTIs.

Annelie concluded her talk by emphasizing that antibiotic resistance is an alarming threat and we must dampen the overuse of antibiotics, as well as find alternative treatment strategies.
Annelie Brauner ended her talk with reflecting on the participants’ reply to whether it’s possible to reduce or avoid UTIs using prophylaxis.

Vikram Khullar continued this session by providing insights from the urinary microbiome, the bacteria, viruses and fungae living inside us. This relationship is now believed to be more complex where we, human beings, alter the bacteria as much as the bacteria alters us

He described that the incidence of bacteriuria in women with LUTS ranges from 29-39 %, meaning these women have low levels of bacteria in the urine but they do not have a UTI. Our immune system relies on the epithelium to keep bacteria away or out of the body. As long as the epithelium retains its integrity, the infection cannot penetrate.

Studies have shown that there is a difference in the bacteria pattern in patients who have lower urinary tract symptoms (LUTS) and those who don’t, showing increased levels of e.g. acinetobacter and E-coli in patients with LUTS.

Analyses of the urine microbiome have been performed in catheter users – and 100 % of the urine samples showed presence of bacteria. Vikram pointed out that it’s key that we understand that there’s good and bad bacteria. Not all lactobacillae are good. There is evidence showing that the microbiome is significantly different for patients with overactive bladder (OAB) compared to patients with control of their bladder. Also, biopsies from the bladder wall from patients with OAB showed multiple abnormal organisms, which were not found in the urine culture, indicating that patients with OAB and recurrent UTIs harbor bacteria. Vikram Khullar then commented on the participants’ view of what normally causes a urinary tract infection.

The link between UTI and bowel may go back to the embryological origin for bladder and bowel, which may have a greater importance than previously believed. This was covered by Niall Galloway, who discussed the role of the host in UTIs. It’s common that UTI is a one out of many problems for the patient, and there are some anatomical factors and physical signs that are associated with UTIs – such as strictures, incomplete emptying, changes in hormones and neurological diseases. But there is also a heredity aspect due to the embryological origin that may result in pelvic floor variations. These anatomical variations of the pelvic floor may affect the function of the bowel and bladder. Bowel and bladder have a shared innervation and their functions are closely related both in health and disease. For example, constipation can have the same signs as a UTI, such as frequent voiding, voiding difficulties, and pelvic pressure/pain.

There has been a paradigm shift in how we view UTIs – from ”body as battlefield”, meaning that the old way was to do a urine culture and treat with antibiotics with focus on killing the bacteria – to “human as habitat”, meaning that the urine is not sterile and instead of killing bacteria the focus is on restoring the balance. Patients should be informed about how to become their own habitat managers with fluid intake, effective and frequent voiding, and manage their bowel to be able to keep the balance. Finally, Niall Galloway discussed with the audience why there’s a link between the bowel and UTIs.

Did you miss this webinar, or do you want to watch it again? It is available on-demand on our webinar page, which you can access here: