Transanal irrigation's influence on gut microbiota could have a positive effect on the immune system and contribute to reduced UTIs. 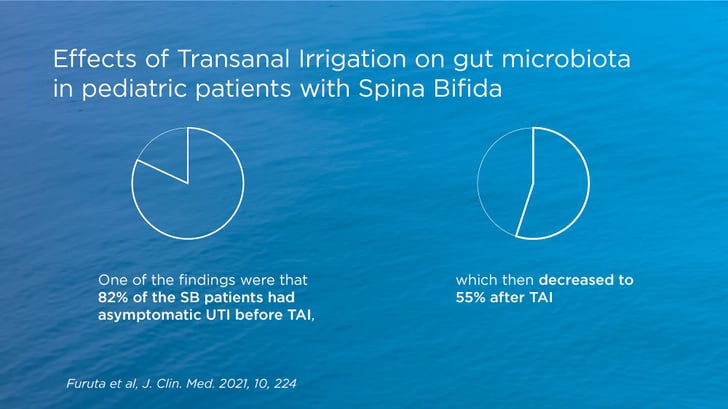 In this small clinical study by Futura and co-workers, changes in gut microbiota after use of transanal irrigation (TAI) in children with Spina Bifida (SB) were investigated. Since those patients have an increased incidence of urinary tract infections (UTIs) and the gut microbiota can have different functions such as stimulate the host immune system, asymptomatic bacteriuria was also investigated before and after TAI. SB patients using clean intermittent catheterization (CIC) and with confirmed neurogenic bowel dysfunction (NBD) were included in the study and started to use TAI every two days for 3 months.

The results showed that TAI significantly improved the bowel function, but no significant changes in the frequency of fecal incontinence were seen. There was a tendency of decrease in asymptomatic UTIs and there were changes in the gut microbiota, mainly:

Roseburia plays a regulatory role in the intestinal motility and host immune system and this may contribute to the tendency for UTIs to be reduced. In conclusion, TAI significantly improved constipation and changed the gut microbiota, which had a positive effect on the bowel function.